What are you looking for?

ICRA Lanka estimates loss of 1% of the GDP due to Easter Attacks: Colombo Page

Apr 21, Colombo: Although Easter Sunday attacks had a profound impact on the GDP, Sri Lanka’s economy performed better than expected in the aftermath, ICRA Sri Lanka, a Moody’s Investor Service group said documenting the impact of the attacks on the economy on the first anniversary of the attacks.

ICRA Lanka’s analysis indicates aftermath of Easter attacks followed a V-shape recovery. The crisis peaked during Q2 of 2019 and economy rebounded in Q4. 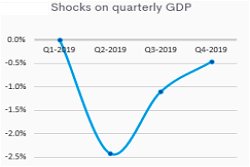 According to ICRA Lanka, the impact on agriculture was minimal. The service sector was the hardest hit of all. Manufacturing sector recovered in Q3 while services made a near complete recovery in Q4.

The impact of the Easter attacks caused the agriculture to lose 1% of its projected GDP in the Q2 and 0.8% in the next. This shock translates to about LKR 5 billion.

In ICRA Lanka’s assessment, the Easter attack shock caused the industry sector to lose of about 2% of its projected GDP in Q2 which comes down to around LKR 18 billion. Following the attacks, the manufacturing sector activities plunged across the board immediately dragging the quarterly growth rate down.

Services sector, which enjoyed a solid growth over the years (averaging 5.6% per quarter for last 10 years), lost the momentum after the Easter attacks. In Q2 it only grew by 0.7%.

The sector started recovering in subsequent quarters and by Q4, with improving tourist arrivals, the sector saw almost a full recovery. ICRA Lanka estimates the total loss to sector GDP is over LKR 108 billion. 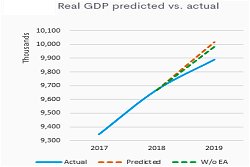 ICRA Lanka estimates the revenue loss from the taxes on goods and services to be close to LKR 18 billion.

Easter attacks had a profound impact on the GDP, according to the rating agency. Had the Easter attacks not taken place, the country’s GDP would have not altered its original trajectory that much. ICRA Lanka’s estimations show in such a case the country would have grown at a rate of 3.3%. The total shock is about 1% of the GDP which is about LKR 150 billion.